I always envisioned this rally to be my first full stage rally, and I'm glad it was. Sandblast is a very safe rally in my opinion. There are barely any dangerous spots, and the deep sand does a great job at stopping the car when it goes sideways. There was no recce, though, so I had no idea what to expect. The only help I had was through word of mouth and YouTube.

Just like Waste Management Winter Rally tire choice was a big decision for us. I brought medium compound gravels and non-rally snow tires to the event. Since the terrain is sand and I only have 165HP, gravel tires would mean that I would have significant power loss. The snow tires weigh about half as much as the gravels, so we decided to try them out during shakedown to see if they held up. My only concern about snow tires was breaking the bead and losing air, but after three rounds of shakedown, they held up great. We decided to go with snow tires for the event.

Early in stage one, I realized how forgiving the terrain is and how safe the stage is. It didn't take long for me to start pushing myself and become competitive. The stages were beautiful - very wide, open sweepers covered in deep sand, so much room for error made the rally pleasantly enjoyable and worry free. I felt great after completing the first stage. My co-driver, Larry Davis, was doing this for the first time, and he picked it up very fast despite not having recce.

The car felt very nimble and quick despite some saying that Sandblast isn't very fun without much power. I think that's coming from people who used gravel tires because the car accelerated almost as well as being on gravel for most sections. There were some cases where power just wasn't there... Every once in a while there would be a straight where it was just impossible to accelerate due to the deep sand. The sand constantly puts resistance on you at random spots. The worst would be around tight turns. The resistance of the sand was too much for a 2.5L NA Subaru motor to handle in those sections. Powering out around the corners was pretty difficult too because that was also where the deepest sand was. Probably because all of the drivers in front of me dug up all of the packed sand.

The second stage was probably the most fun, mostly because of its length - 14 miles. Right away, after about only 4 miles, we caught up to a Miata. This was probably one of the most frustrating parts of the event. The dust that the Miata kicked up was incredibly blinding. Any time we were closer than 1/8 of a mile we could not tell where we were - not in front, not to the sides, nothing. This was quite a challenge for Larry and I, and it made our teamwork more important than ever. I really wanted to pass the Miata, but they didn't know we were right behind them. After I blew through some caution tape on a 'turn left two' I decided to sit back and play it safe. We eventually came to a short packed sand/gravel section that settled down the dust. That's when we swooped in and cut inside of the left two that they took wide. After that, there was a new open straight on gravel. Towards the end of the straight was a small water crossing - at least I thought it was. Turns out it was about 2 feet deep, and we took it at about 70MPH. There was a large amount of shock that was felt after we plowed through it. In that moment, I was sure I broke something. Nevertheless, we finished the stage without any damage. It was a good feeling knowing that the coilovers I built can withstand that kind of force. 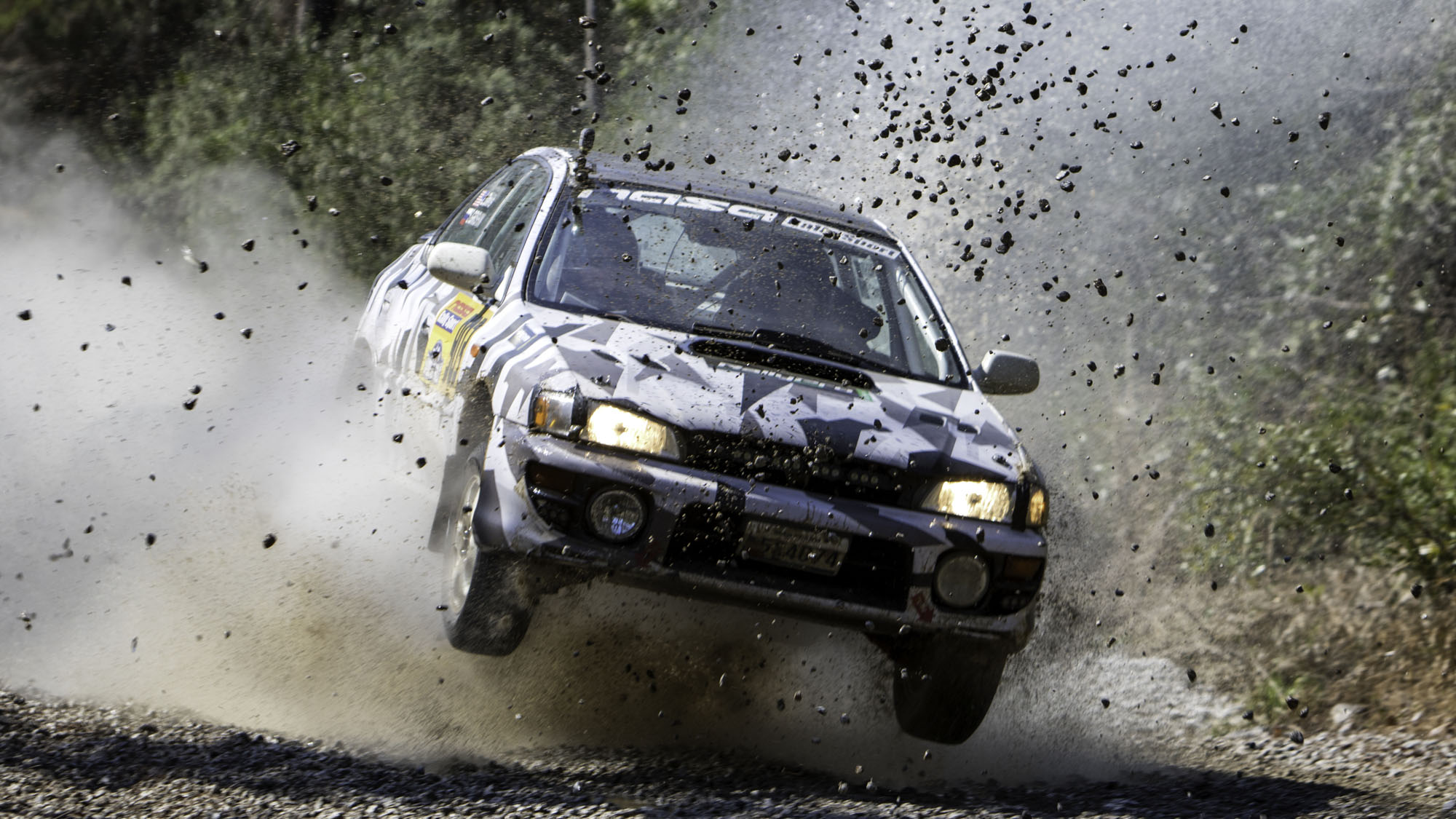 For our first service, we saw quite a few "Did Not Finish" (DNFs) already. Most of them seemed to be mechanical issues though. Our friends, who were crewing for Ryan Kolupa and Connie Sott, came to help us out since they had a clutch failure in stage one. We went from having a crew of one to a crew of four just in time. We inspected everything, and the only problem was a CV boot slide off. I later found out that the exhaust kept hitting the axle where the boot clamps on when going over high centered areas. The best we could do at service was using a big ziptie, though, and it held up throughout the event. 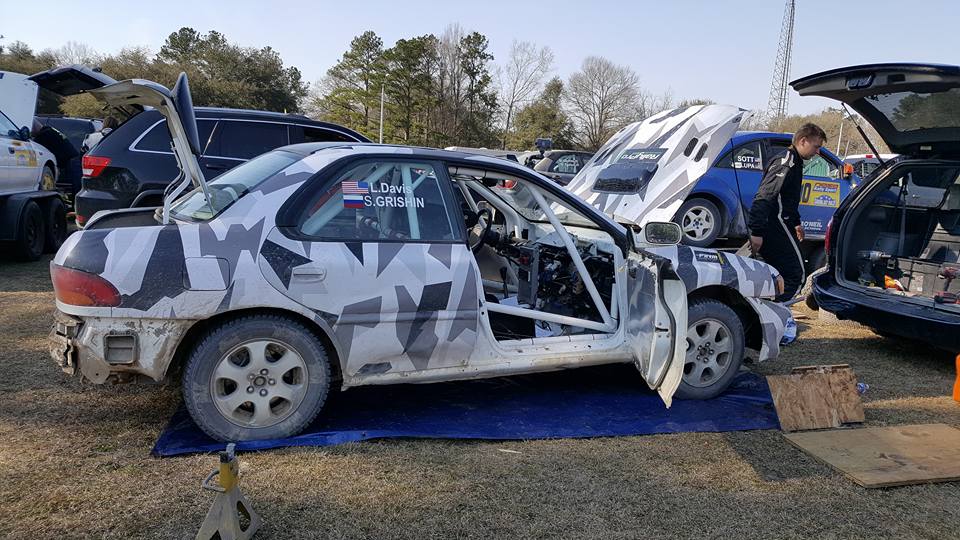 On the fourth stage, we made a rookie mistake that I will remember forever. I did a tire change with 1 mile left into the stage. Stupid, I know, but I thought this was the 14 miles stage, not a 7 mile stage. I should have double checked with Larry, but he told me to make the call and I decided to do the change without knowing. This tire change wasn't very smooth. The flat on our jack was pretty large I thought, but apparently not for sand. We were barely able to get the tire off of the ground for a change. After we did the change, we went back on the stage. The next call was a turn left two after a long straight, but there was no caution tape so we drove through the woods until we hit a dead end. After backing up an 1/8 mile, we found the turn. And what do you know, we reached the end of the stage half a minute later. Puzzled, I asked if that was really 14 miles, and that's when I realized my mistake. Oh well, now I know better. That's all it takes to add 7 minutes to your time.

The next stage was the 14 mile one with the water crossing, but this time we ran it backwards. I decided to take it easy on the water crossing this time and slow down for it. That was mistake number two, actually. There is a point where you need to decide if you want to take it slow and drive through it, or take it fast and jump it. If you go in between those, the lower radiator support will be clipped. The first time was more of a jump, instead of going into the water crossing and back out, I just jumped over and bounced. This time, I probably went 40MPH, and fell inside the dip and pushed my lower radiator support in. If I took it a bit slower like everyone else, that probably wouldn't have happened. 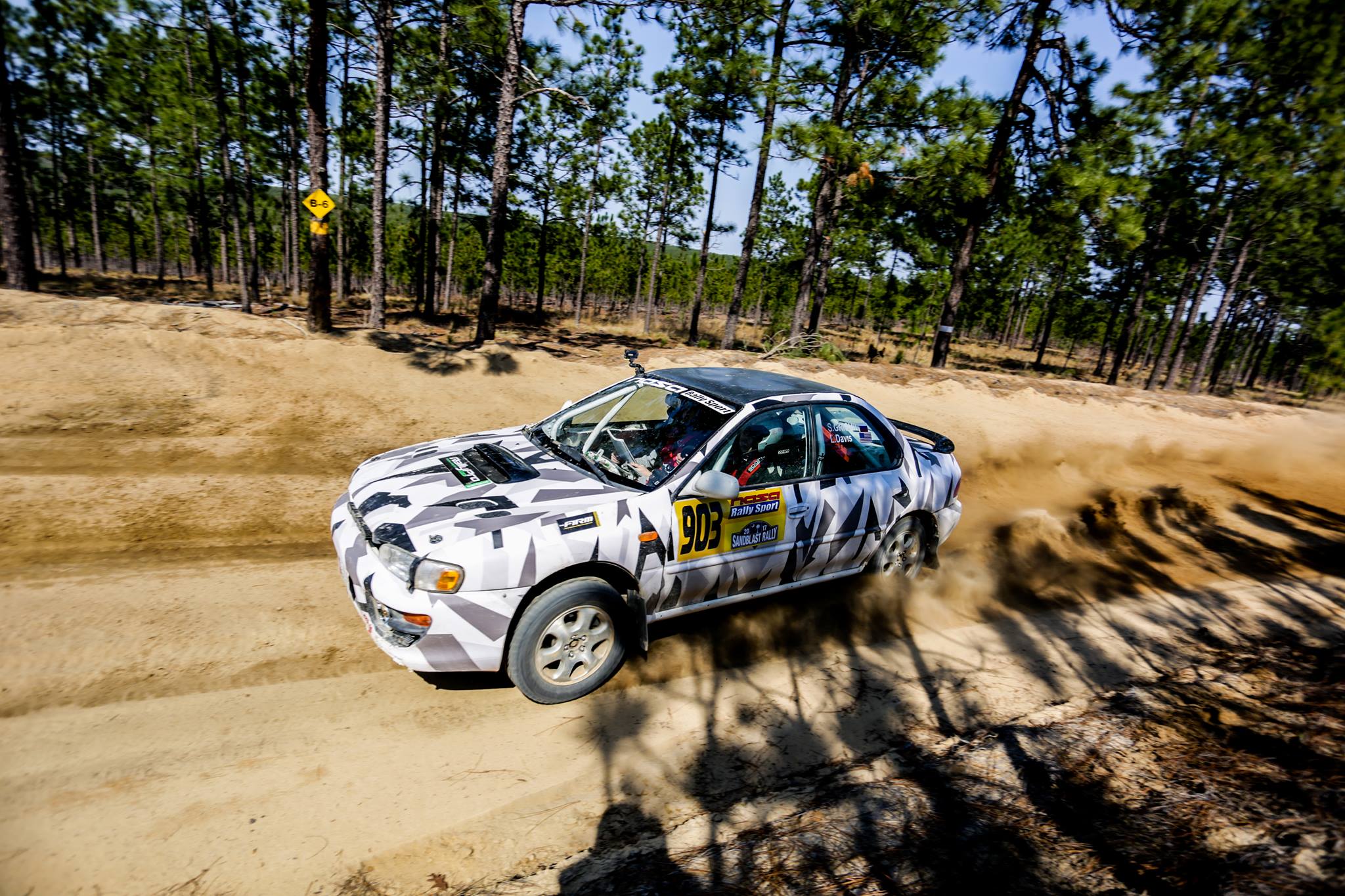 When we finished that stage, the car started overheating. I didn't realize that I smashed the lower radiator support until after we finished the stage. The plastic tanks on the stock radiator cracked and we lost plenty of coolant. We had 8 miles of transit to get to service. I called up my crew and told them to look for Brian Battocchi. His motor blew after stage two, so I was hoping I could use his radiator. Not even a minute passed, and they called back saying they found him and we could use his radiator. Meanwhile, Larry and I were limping it back to service shutting the car off every 15 seconds and rolling down the hills. We made it back fine and started pulling the radiator out. We needed to pull out the radiator support in order to put the new one back in though. Luckily, Brian also had a winch on his trailer. I got in the car and held the brake as he pulled out the lower radiator support. It was almost pulled out all the way, which was good enough for us. We were able to do all of this and put a new radiator back in within 25 minutes. I was very impressed with my crew, and very grateful for Brian coming in and keeping us in the rally. 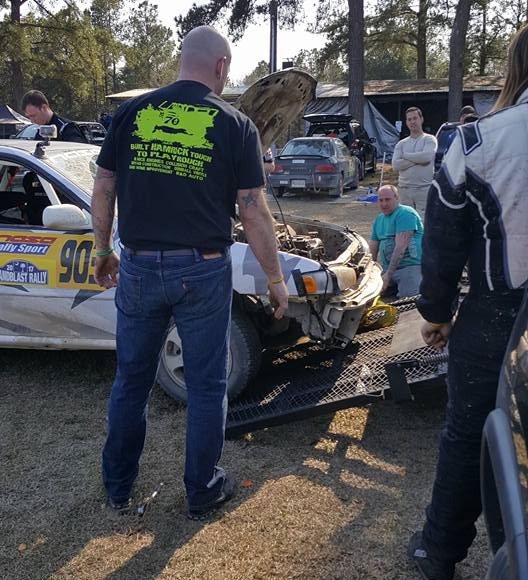 We only had two stages left until the end of the rally. For the next stage I had the biggest 'oh shit' moment. I initiated a hair pin turn too early and clipped the inside of the turn. The car leaned on two wheels, and almost tipped over, but we came back down on all fours. No roll, no problem, we kept going and laughed about it.

The last stage was going really well until the last mile. We debeaded the right front tire taking a really tight left turn in deep sand. Then on the next turn, we debeaded the right rear tire on a similar left turn. Learning from our previous mistake, we kept going. Luckily, driving on the rim in sand is not that bad. As long as the tire doesn't come completely off, driving straight doesn't feel very different. Although, powering out of turns is more difficult.

We finally finished the last stage, but we still needed to transit back to parc ferme. I keep an air pump in the car at all times in case I have a slow leak. Larry was able to use the air pump to reset the bead on one tire, while I replaced the other one with a spare.

We made it back and saw the results for the first time. We had no idea how well we were doing during the rally until then. We came 4th in our class, but if we didn't stop for that tire change we would have taken home 3rd place.

I could easily say this was probably the most fun I have had in a very long time. I will for sure be back for Sandblast Rally next year. I would recommend anyone to compete in this event, especially beginners.

I want to give a shout out to my friend Jack Swayze for letting me use his truck and trailer since mine wasn't ready yet. Very generous of him to do that for us, and I'm glad that he is always supportive of my rally adventures. 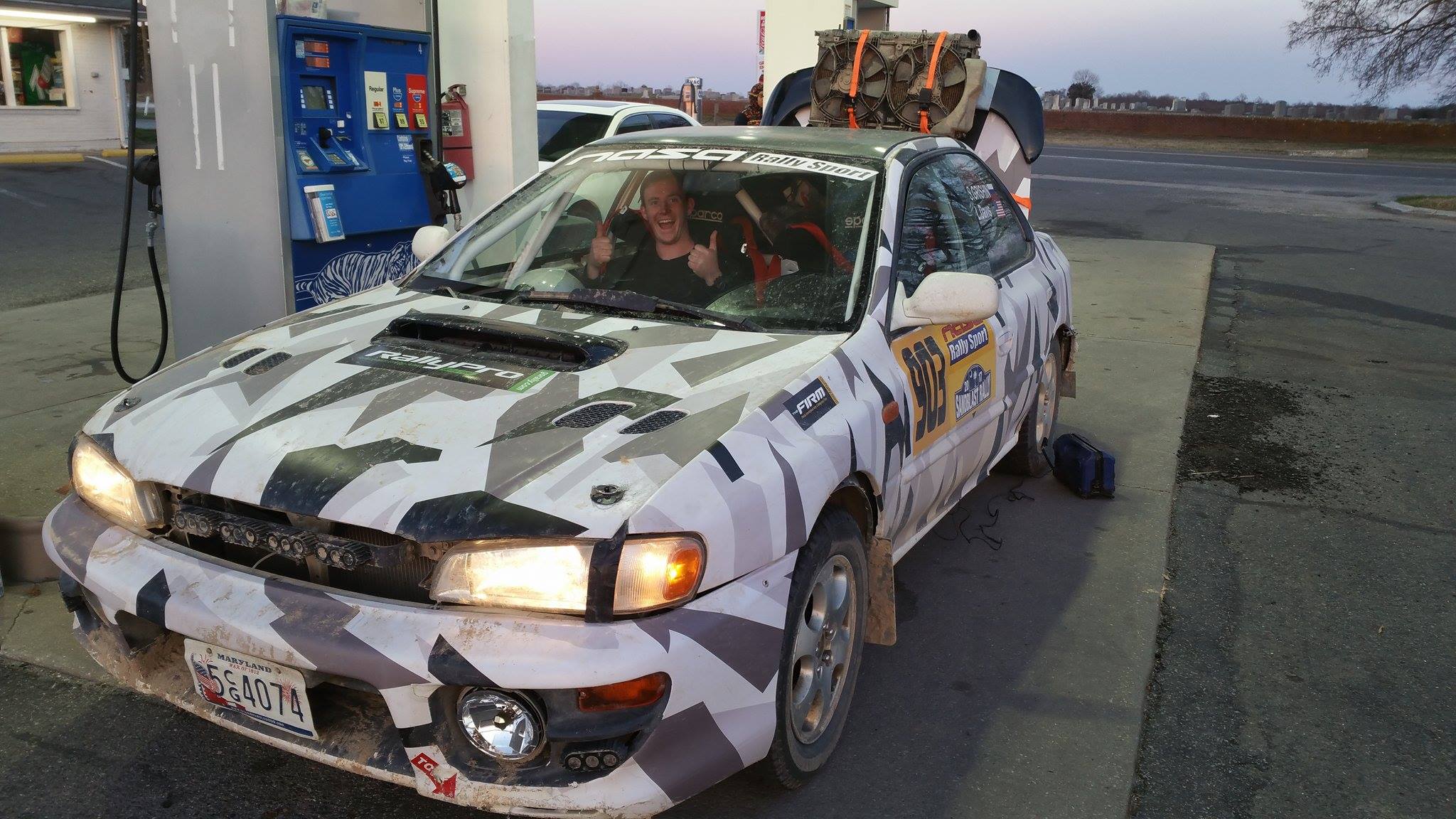