Ever since last year, I've been waiting to do this event myself as a driver. Derek and I put down some competitive times last year in the 2 wheel drive class, and I felt that my co-driving experience from last year would carry over to this year. This year the event was even slushier than last year.

The car was put back together the night before the event because I was painting the interior. Since it was my first time using an HVLP gun, it took much longer than I'd planned, but I'm glad it was finished just in time. I also put down diamond plate flooring to reinforce the floor and protect it from moisture. Here is the before and after: 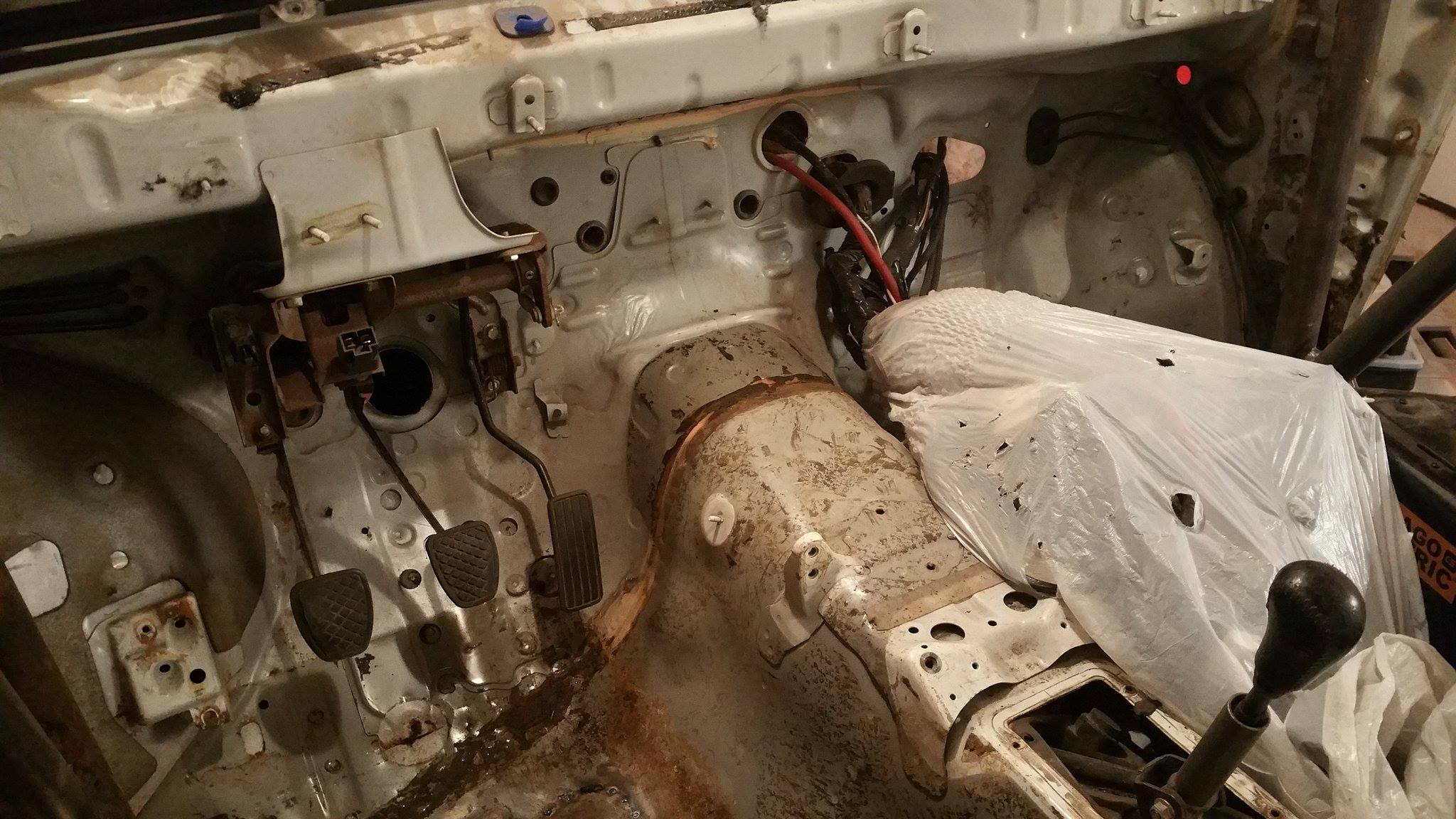 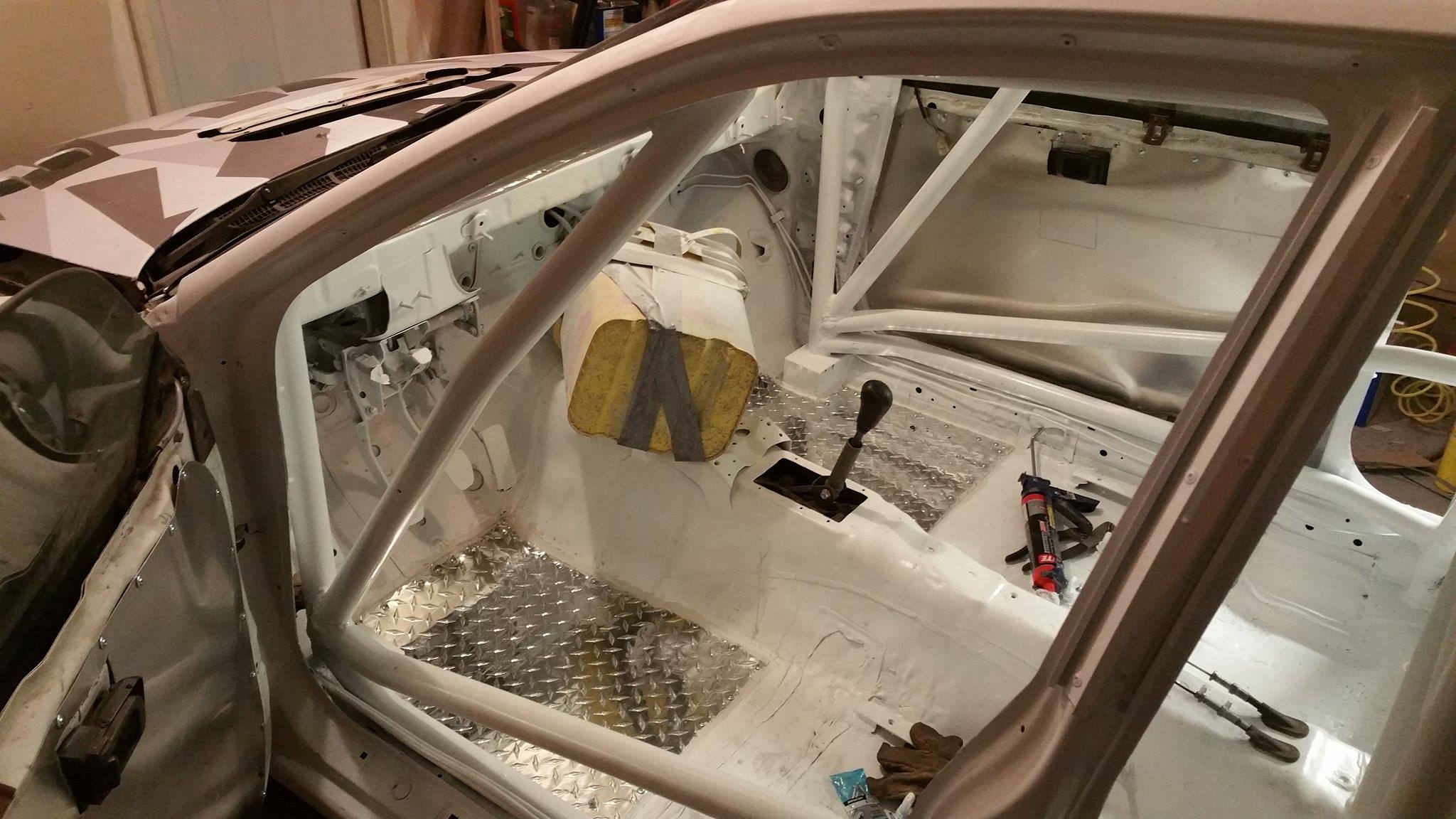 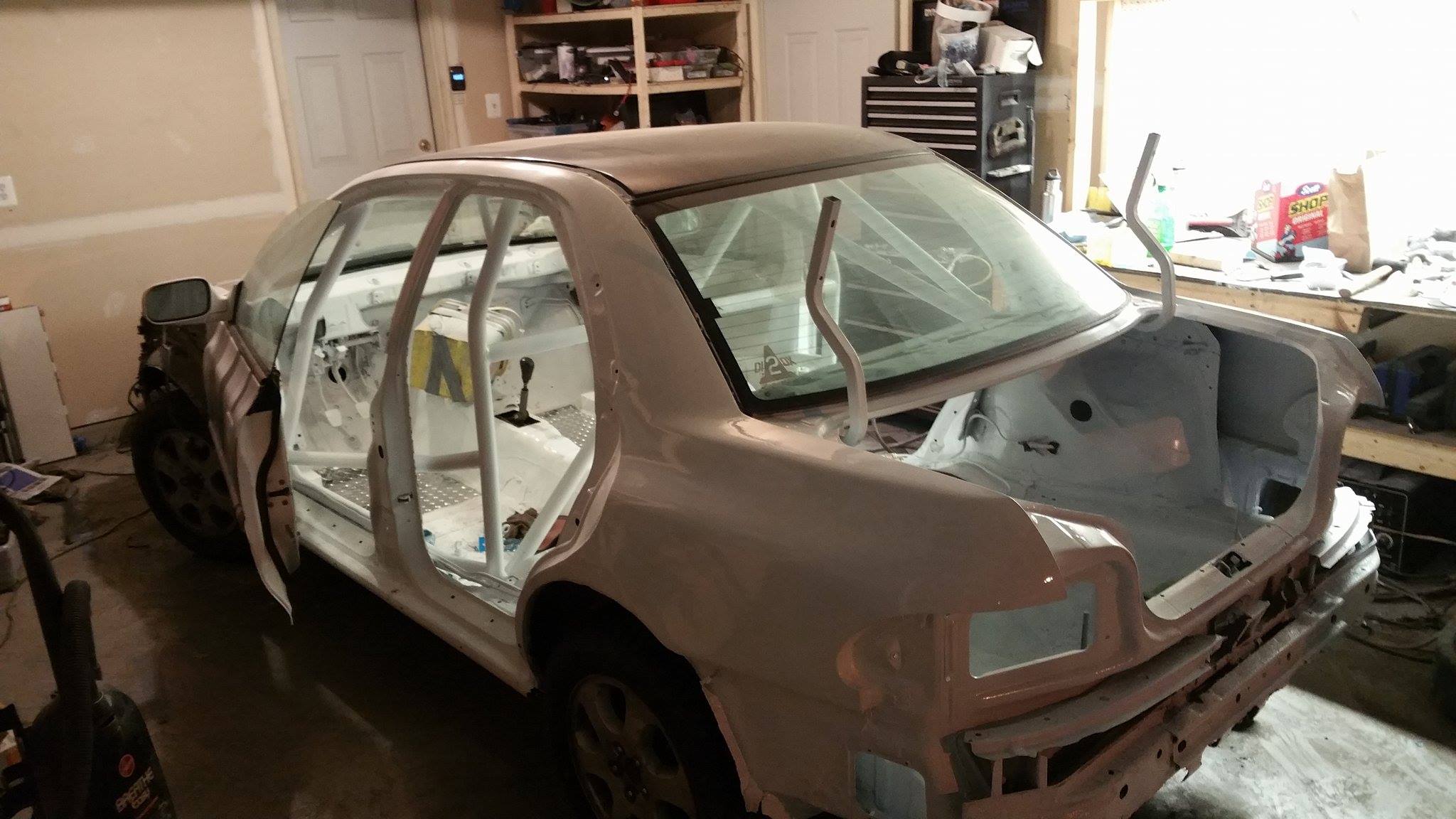 Anyway, back to the event. Our plan was to get to our AirBnb and then head out to recce as soon as we arrived in Welsboro, PA. That didn't happen. We arrived 30 minutes into recce. We showed up at the start of the stage and unloaded the trailer. Then Jack and I were on our way to the stage in the Subaru. This is an SCCA Rallysprint, and they permit using the rally car as the recce vehicle, so it worked out perfectly for us. The Subaru had snow tires on throughout recce, and the grip was pretty good considering the entire stage was covered in snow. I was also very impressed with the steering quickener that I installed prior to this event; correcting when coming out of a turn was phenomenal.

I really wanted to run snow tires for the event, but the temperature went up to 55F the next day, so I was left with a dilemma. I prefer running snow tires when I can because of how light they are. It feels like I'm losing 40HP every time I put the gravels on. My gravel tires are medium compounds, so they aren't very helpful in the slushy stuff, and my snow tires don't have sidewalls that can handle much corner loading. We ended up deciding to go with the gravel tires because we didn't want any punctures or debeading, and we anticipated most of the snow to melt away like last year.

That evening my crew worked hard to make sure everything was inspected, mounted securely, and ready to pass tech. Shoutout to Chris Lomicka, Thomas Critelli, and Charli Tameris for the help!

The next morning we passed tech and went down to parc expose. 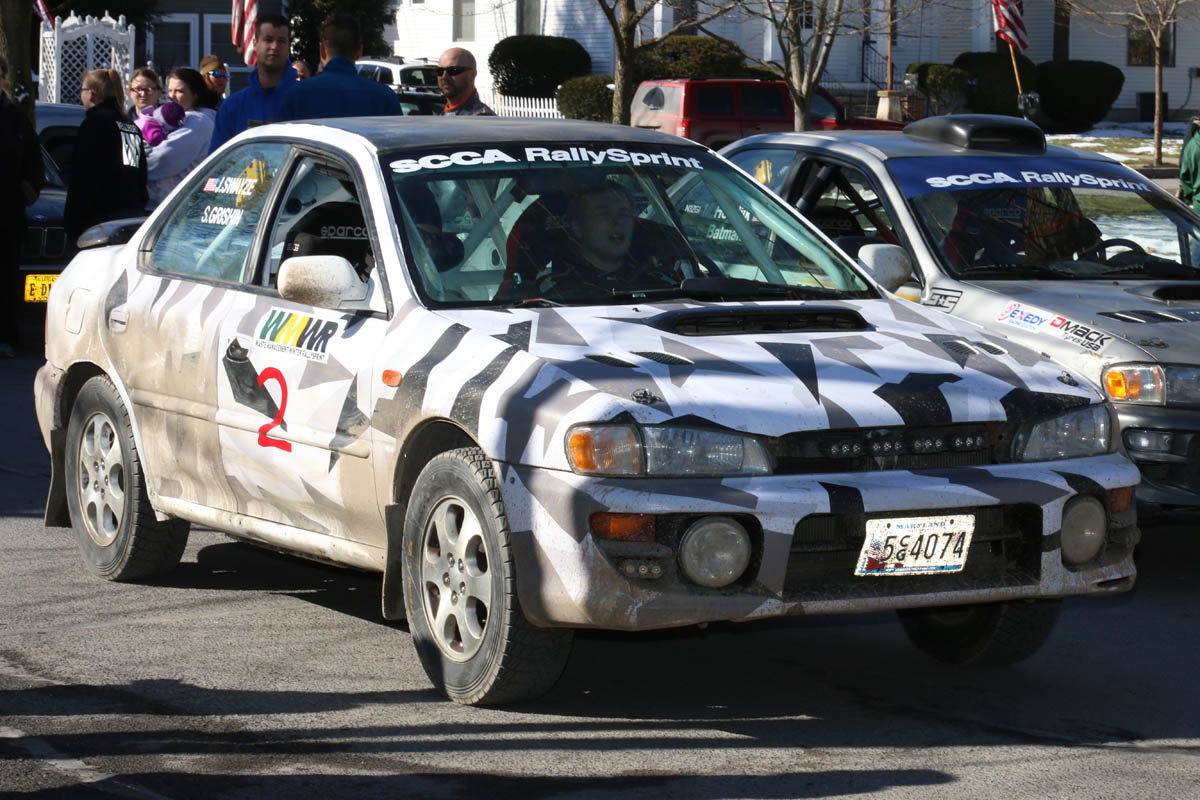 The stages were slick to say the least, and in the worst places! For the first stage, I understeered most of the tight turns that came after fast sections, and we still passed a 240SX. I had to back up or come to complete stop about 3 times because of the poor traction. This was a bit frustrating because if I would've picked the snow tires, I probably wouldn't have had this problem. I had no regrets in the tire choice, though, because there were plenty of sections that weren't covered in slush as well. 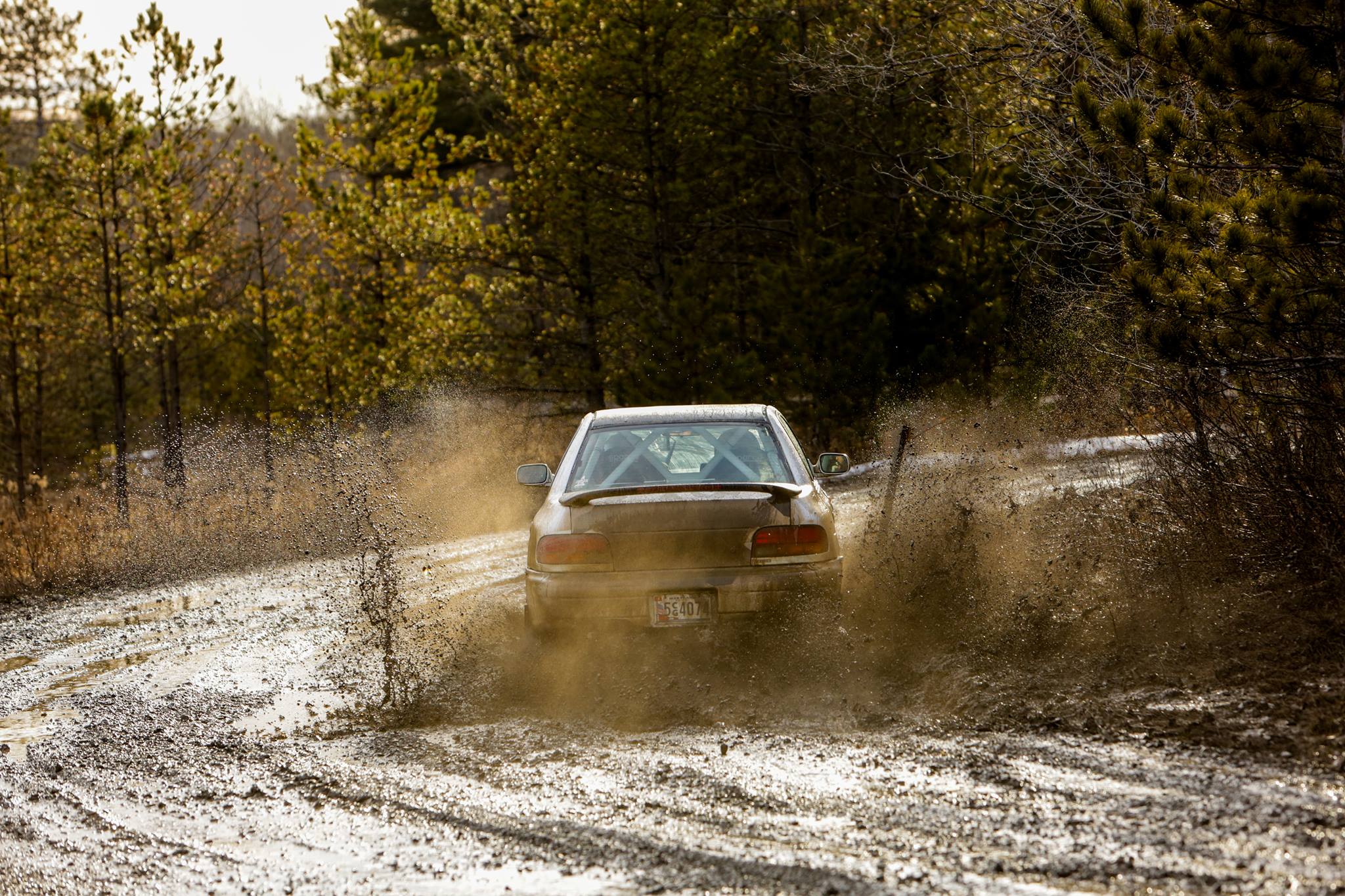 The second stage was a lot like the first, but I controlled the understeer better by simply braking more before the turn. The third stage was odd. After coming out of a slick, uphill understeer section, steering input was pretty much gone for about 200ft. I was concerned, and I thought there was flat. I got out and checked, but everything was fine, so I hopped back in and kept going. Getting in and out of the car is a hassle with all of the safety gear, so we lost quite a bit of time. One team passed us while we were out of the car. Another car almost passed us, but we managed to stay ahead. 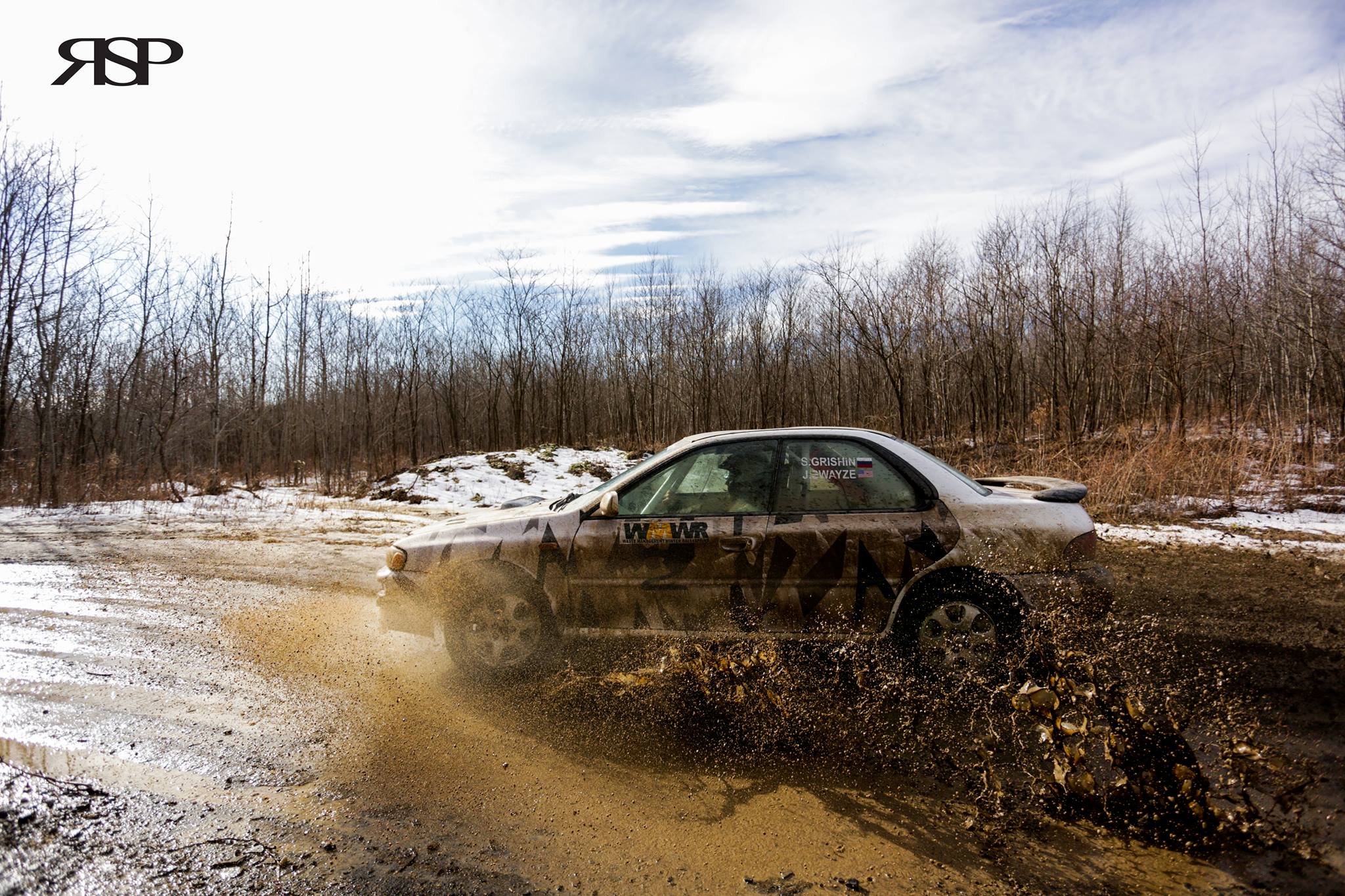 At service, our crew was back at it again: inspecting everything and making sure nothing came loose. Fortunately, everything was good as new. Thinking about how I was doing so far, I was impressed with my control on the slippy surface. However, I was going sideways way too often and doing a pendulum turn only worked half of the time depending on how much grip there was. Honestly, I'm surprised that I kept it together given how often I kept going sideways long after the turn has passed. Jack and I were both surprised at the amount of trees we dodged. The steering quickener really made it easy to be responsive during sudden traction changes.

Stage four was odd because the fog light broke, but it didn't matter because we had six Nitrous Lighting rally lights up front. There was also a straight away with a pile of rubble to the left side. Surprise! We lost traction in the middle of the straight and had to dodge it. That was definitely the most disturbing part of the rally... 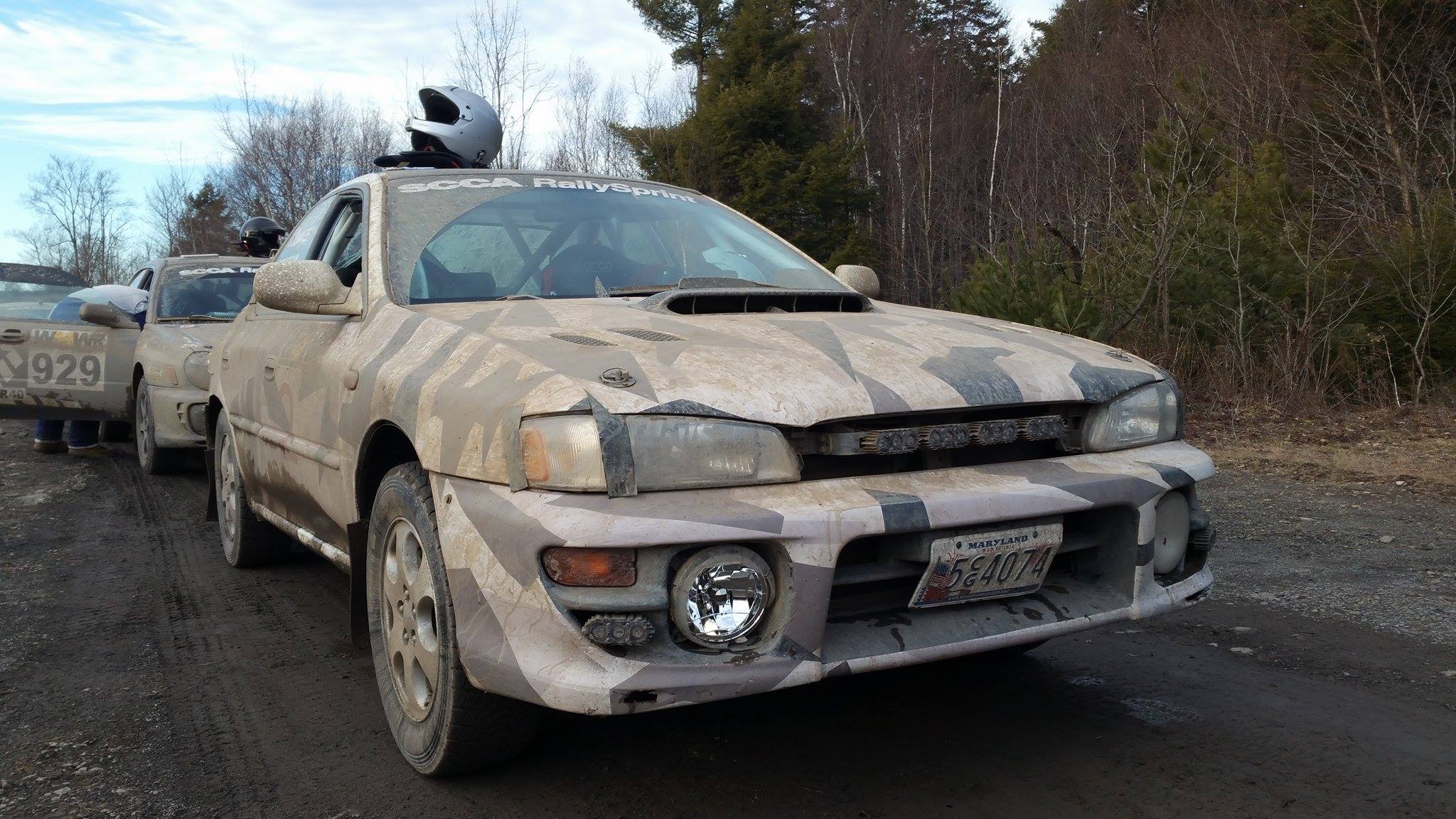 Stage five was very unfortunate. We had to make a square right, but the car had no grip whatsoever and decided to go straight right into a tiny tree. The tree plopped straight down. At the time, I thought that I had a small dent in the bumper, but there was no sign of it! That wasn't the unfortunate part though; it was the turn immediately after. Just a regular left 3, but the understeer caught up to us again and we got stuck in the snow off to the side. Josh Hickey tried pulling us out, but his E30 couldn't do much to help us. After several cars came by, Robert Pepper in his Porsche 944 tried pulling us out. He pulled us out about a foot and then left, but that was just enough for me to wiggle out of the snow! We started pushing now, just for the fun of it. By this point in the rally, I learned to stop trying to set up pendulums and just drive the driving line. The last half of the last stage was probably my fastest time. I ended up passing Pepper and the 240SX as we finished, cursing all of the slippy turns along the way as I powered through them like never before. 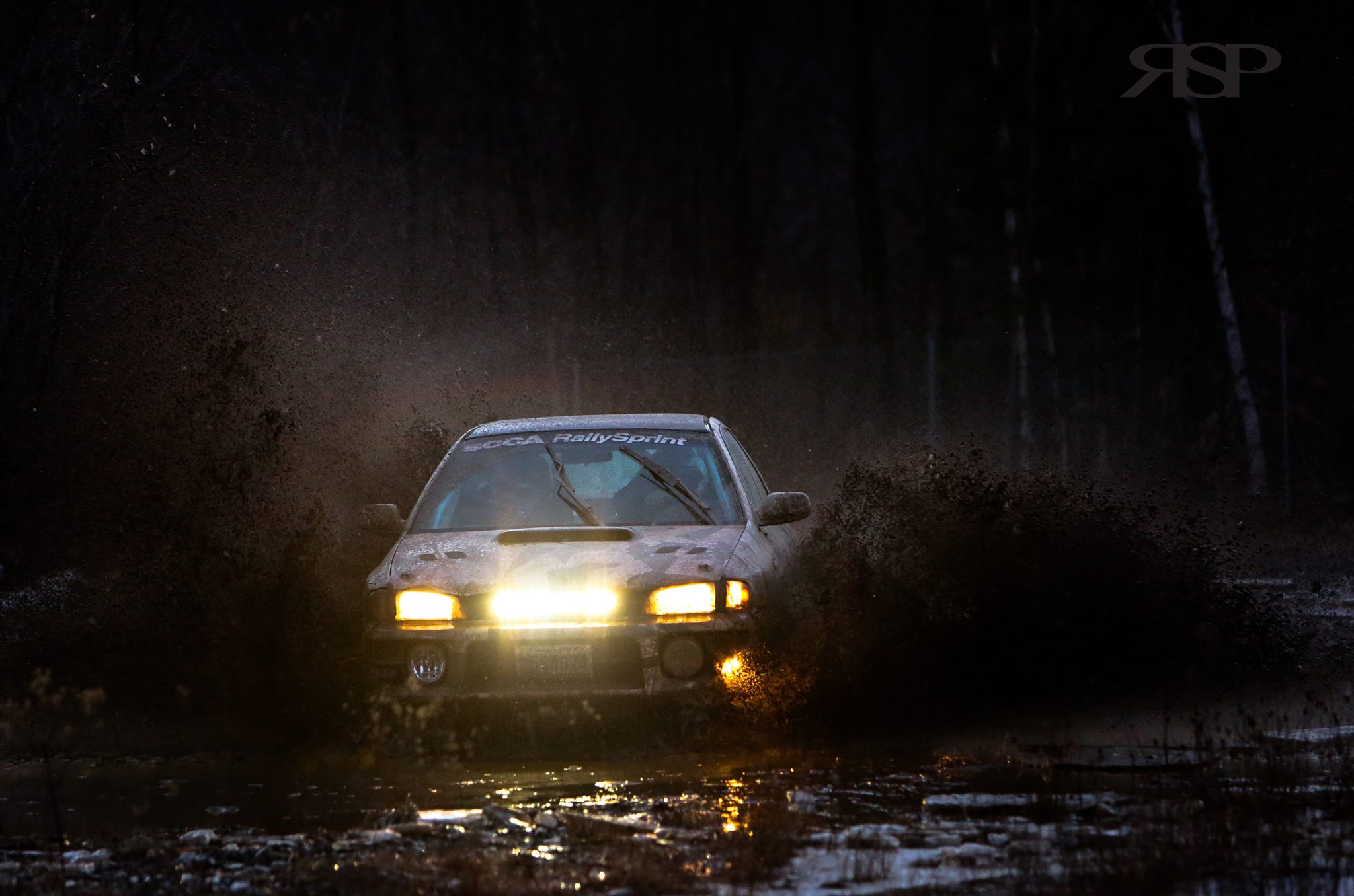 I thanked Pepper for pulling me out during the awards ceremony. I found out that his alternator died prior to pulling me out, so he said the least he could do was to help me out since he probably wasn't going to finish with a dead alternator. I definitely couldn't have finished without his help.

We came 3rd in our class, but I was just happy to complete the event! This was my first somewhat serious event. I have never driven for an SCCA Rallysprint or any stage rally. I'm glad to say that I came home happy and the car was in excellent shape. I'm also very thankful for everyone that came out to help me work on the car prior to the event. I had a blast, and I can't wait to continue rallying more this season!

Thank you again to Ryan Stermer Photography for the cover photo of this article.