Earlier this week, I showed you all how the Subaru's roof was repaired. Doing that repair really cut it close to our next event, Black River Stages (BRS). We did a few modifications to the car since STPR, as well as some repairs:

After our tumble at STPR, I was determined to do well at BRS. I studied the BRS stages by watching Youtube videos. I also learned from watching other drivers' in-car videos at STPR to see what I could have done better. I was more ready than ever for this event.

Just like always, we arrived extremely late at night the day before tech and shakedown. We had a late start going to bed at 4am and waking up at 11am, but that's okay for this event. This event did not have recce for us to check out the stages before hand, so on Friday all we had to do was tech inspection and shakedown. 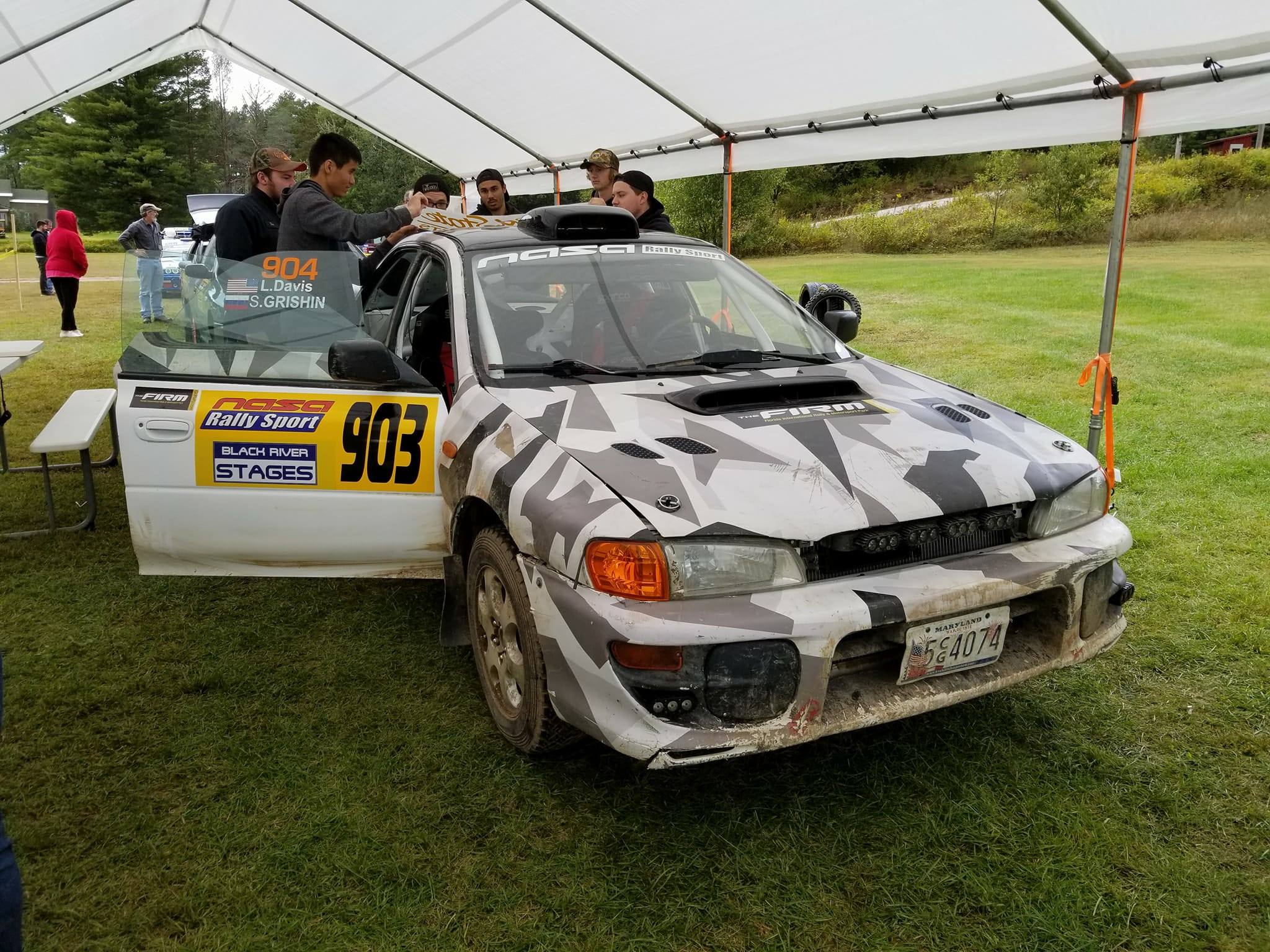 We had no problems at all at tech inspection. So after several hours of downtime and parc expose, we were off to shakedown.

We did shakedown like usual, get as many runs as we can or until we feel like we did a perfect run for this short course. I took the first run kind of slow to get a good feel of the car, we also need this run to help us sync up on the notes. This is usually a good time for me to get Larry tuned in to the way I want notes being called. We were able to get three runs in, and after that we felt fast, all synced up, and ready for a day full of racing.

The interesting thing about this shakedown was that it was at night. We were able to see perfectly with our lighting setup. It sure is nice having my Nitrous Lighting LED Light Bar on the car at all times. Some rally cars have really large HID light pods that are taken on and off of the car. They can take up precious time installing during service. We save a lot of time by not touching the lighting at all during a rally weekend. Last year, when I co-drove at BRS, my driver's car had pod lighting that would constantly need to be realigned after each stage because the positioning would drift over the course of the stage. I am happy I never have to worry about that with my car.

We started off race day early in the morning on Saturday.
Breakfast of choice: cold falafel from Trader Joe's. 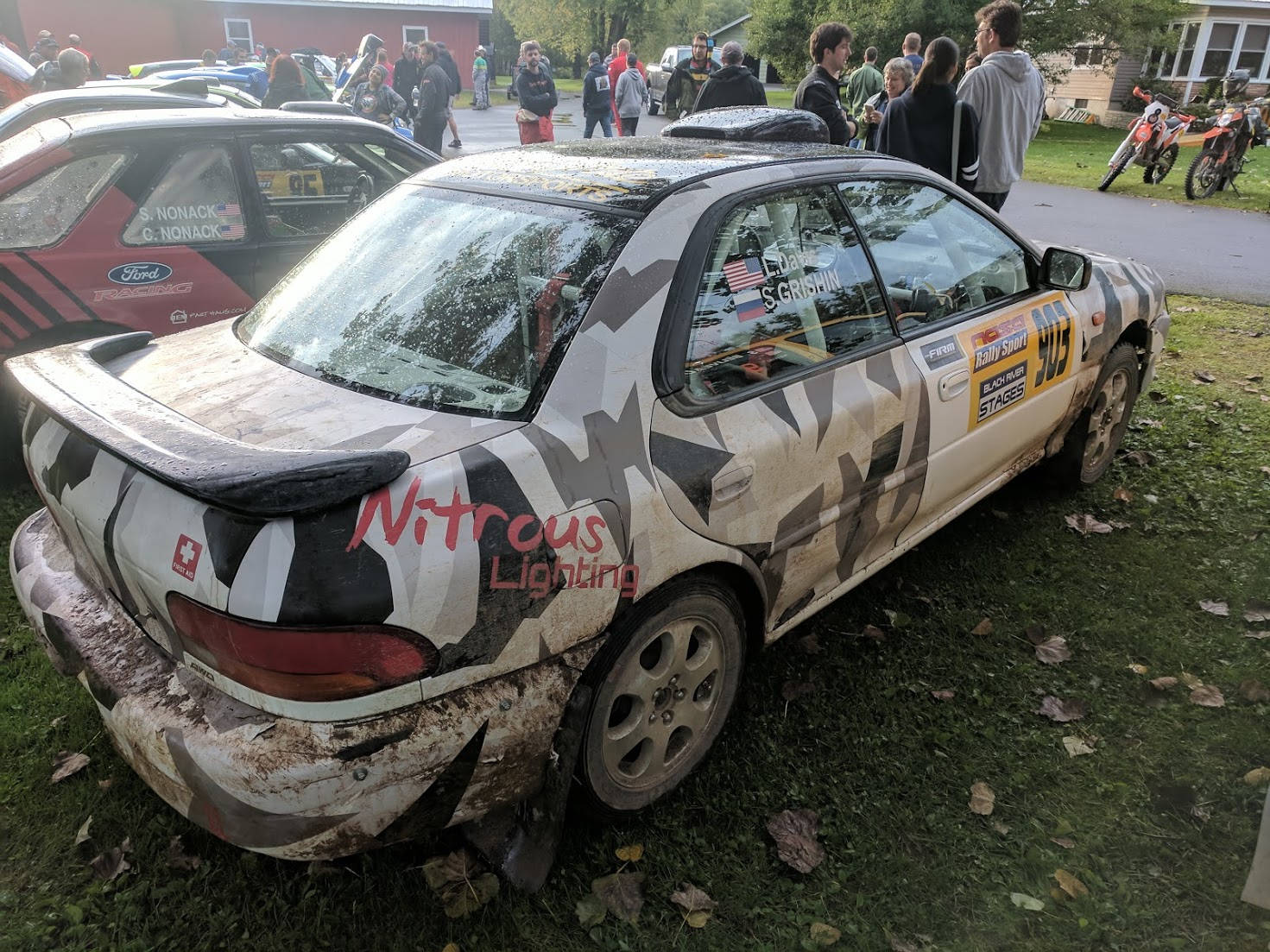 We found out that we were 6th in line to out of 23 cars. Typically, faster cars start first, so seeing that was somewhat flattering for us, but mostly a relief. This was going to be the first stage rally where I would not have to worry about catching up to the dust from the car in front of me. We wanted to take this opportunity to prove ourselves, and hopefully secure a good position like this in the future.

It turned out that there was only one other car in my class, NA AWD, for this event, and only 6 cars for AWD in general. As far as power goes, I would have to guess that there are about 16 cars that have more power than me. Which puts me at a disadvantage when it comes to straights, but the AWD helps me pull out of turns quicker.

We got to see a lot of cool cars at parc expose. Our favorite was Michael Hooper's new Lexus IS350 rally car. Who was starting at 5th place, right in front of us. You can check him out at River City Rally. 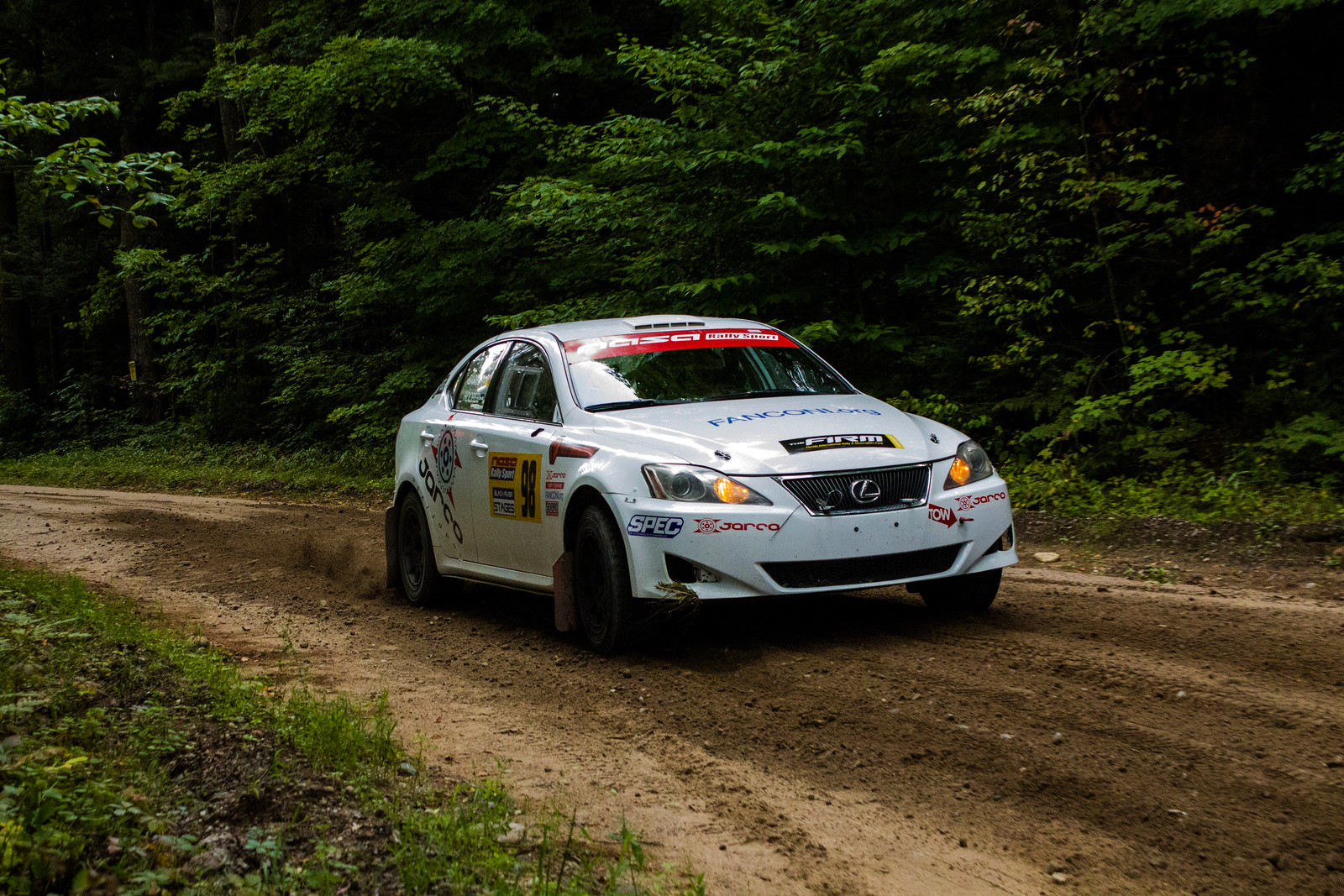 We started stage one fairly strong. We got 12th out of 23 cars; I would say that I was more conservative than usual. That's a good thing though, at least for the start. Hooper told us that he broke well over 100mph on this long straight away in his 306HP IS350, while we struggled to get to 85mph in our 165HP Subaru! One day we will have that much power to play with, but just like everybody else we need to start somewhere. And as we know from STPR, I still have a lot to learn!

Stage two was great! Larry and I worked together very well, and we had a lot fun so far. We took 7th out of 23 cars on this one, so we really stepped up our game. There hasn't been any DNFs yet, and we have not had any sketchy or scary moments yet. Except for one of the combo cars that sweeps the stages between motorcycles and cars... This volunteer was a little too hyped up for the rally and rolled their Outback over on stage! It wasn't severe by any means, but it was funny to watch as we passed them on stage 3. 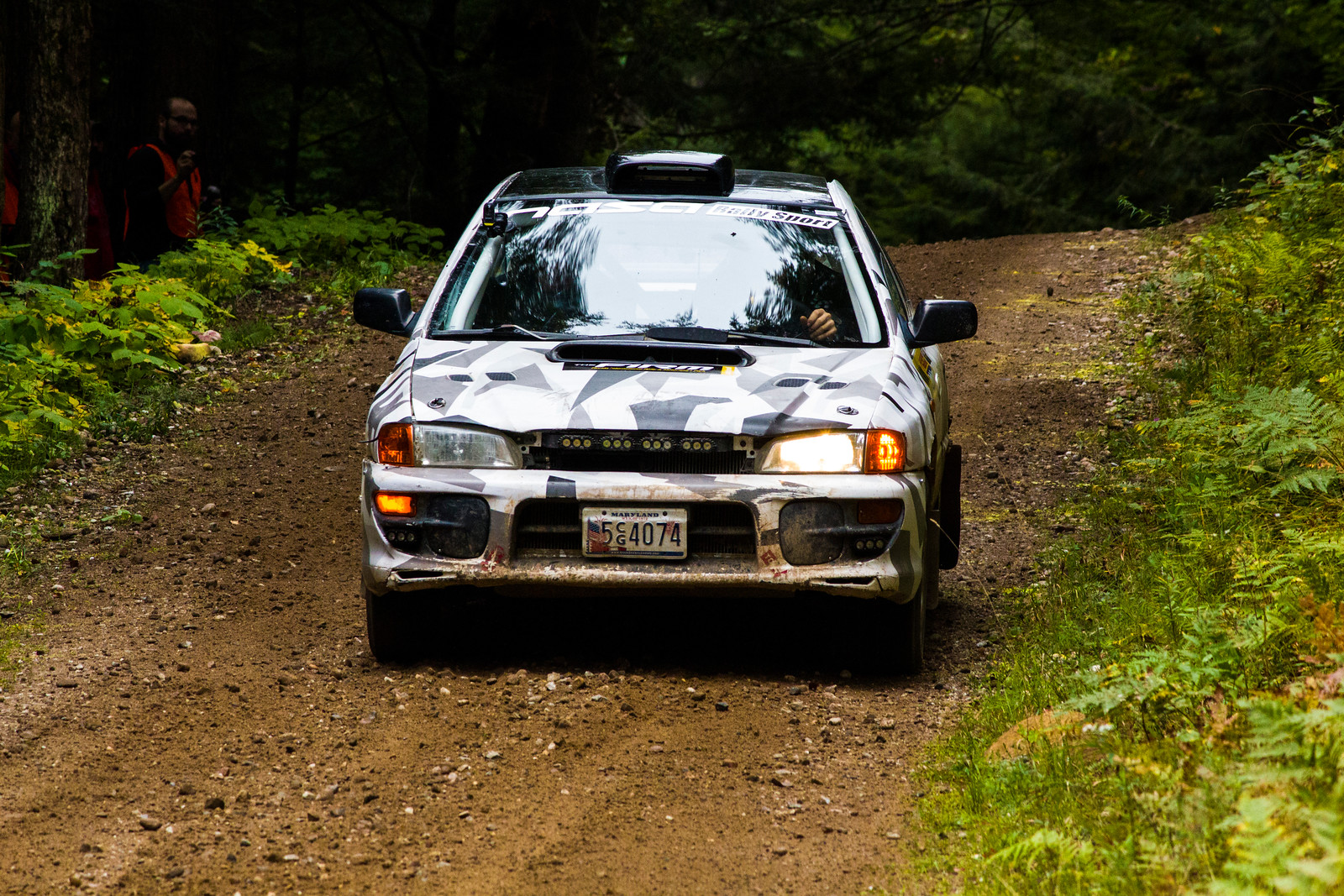 Stage three was even better! 3rd fastest car this time, and only 13s slower than 1st with only half of the power! This bumped us all the way up to 2nd out of all of the AWD cars. Wow! Remember, there is only one other non-turbo AWD car out there besides me. This was definitely the highlight of this rally for me.

I was doing what I came here to do to make me a better driver: have Larry call the notes an additional turn ahead of time, optimize my driving line, and play it safe. Before, I would take turns hard and go sideways, but I wasn't thinking about how that affected my actual performance. Usually, that just made me slow upon exiting the turn. Now I had a different mindset: come into a corner in a safe and reasonable way, but make sure to power out of it as fast as possible.

Below is a video from that stage:

Then we went to service. We looked over the car with our crew, and everything checked out okay. Don't forget to check the oil though, because this 210K mile motor likes to drink when I shift at red line every single time.

Stage four was the same as stage one, the one with the long straightaway. One of the turbo AWD guys was not able to finish this stage. I was the 6th fastest out of 22 cars that finished this one. A huge improvement from stage one while maintaining my 2nd place position in AWD. There was one sketchy moment on this stage though. During the long straightaway, the rear-end of the car kicked loose while braking before the turn. I did not make too much of it at the time, but looking back on it now, I think my brakes had too much rear bias.

Stage five was not good. Larry lost his place in the notes and had trouble finding his place again. I think I should take the hint and install an odometer for him next time so this will not happen again. I ended up going out a little too wide and sent the rear tires into the soft/slippy edges of the course. The rear end did not have enough grip to push us back on course in time before we hit a log on the ground and then a tree which ultimately stopped us.

The rear was high centered on the log, and the right rear wheel had a lot of positive camber. The right rear door was smashed as well. We were determined to keep going, so I pulled out the tow rope. Luckily, the Beliveau Racing Boys were there to save the day and pulled us off of the log. We jumped back into the car and kept going. Unsure of the extent of the damages, we took it easy because hitting one tree is bad enough. We knew that this was a stage with a lot of jumps, so I did not want to take any until we knew exactly what was damaged. But as we know, if there are jumps, Sergei will jump regardless of what he says. That was true... I did take two on accident. It's amazing how easy it is to jump over some of these bumps. You can watch all of this happening on my YouTube video. 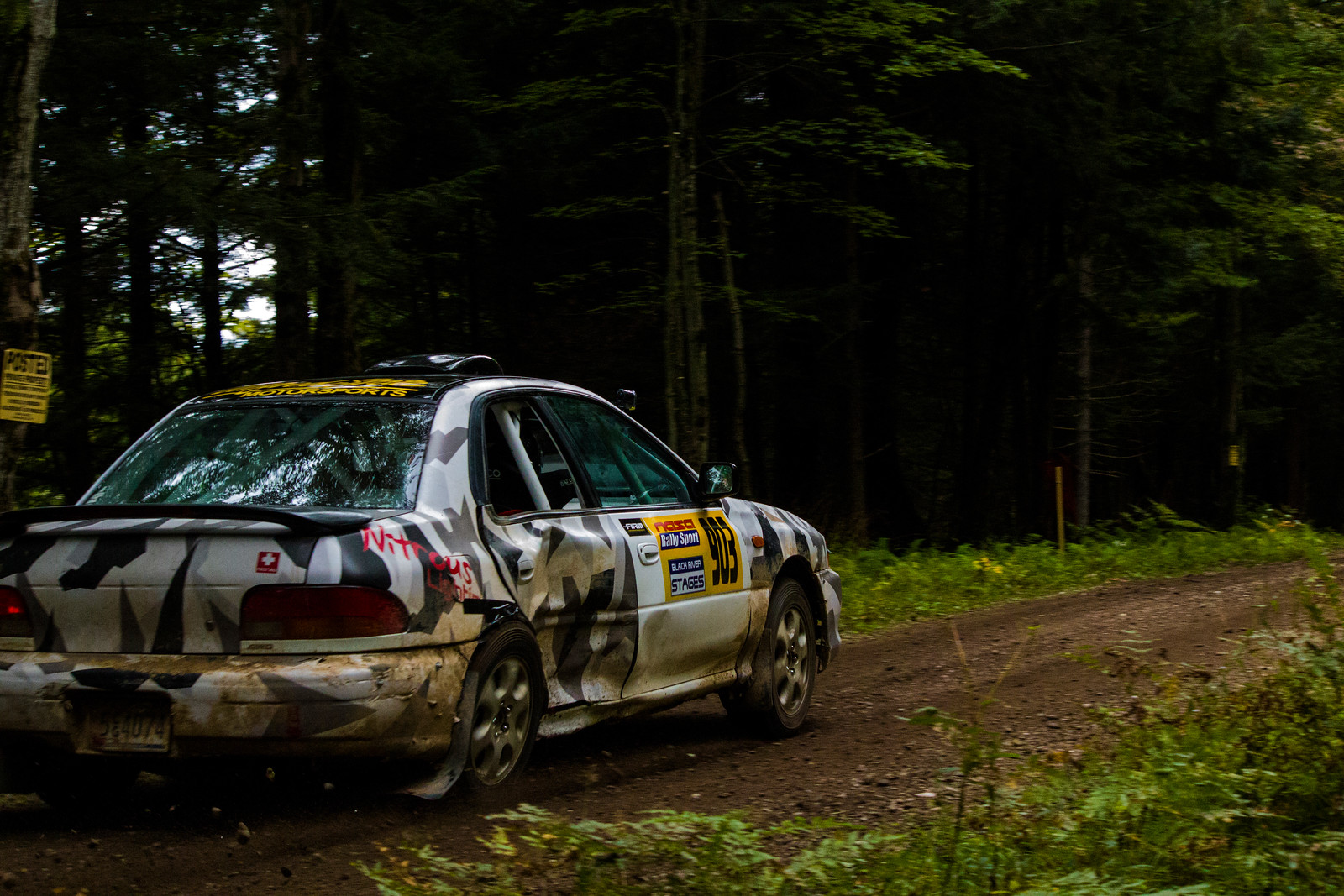 This brings me to another improvement I would like to make on the car - the suspension. My current setup can take the impact of these jumps, but the suspension doesn't absorb it very well. It just crashes onto itself and requires me to settle it down after I land. Which is fairly unnerving to put it lightly.

We took a look at the car after we finished the stage. We took the wheel off and it was not very obvious why our camber was way off. After close inspection, I noticed chipping at the knuckle - a good sign of it being bent. We put the wheel back on and went back in line to start the next stage. We gained so much time that it was unlikely for us to catch back up. Regardless, we still wanted to finish. In the meantime, we asked our crew to find out if we could get another knuckle from another other team. Service was right after this upcoming stage. 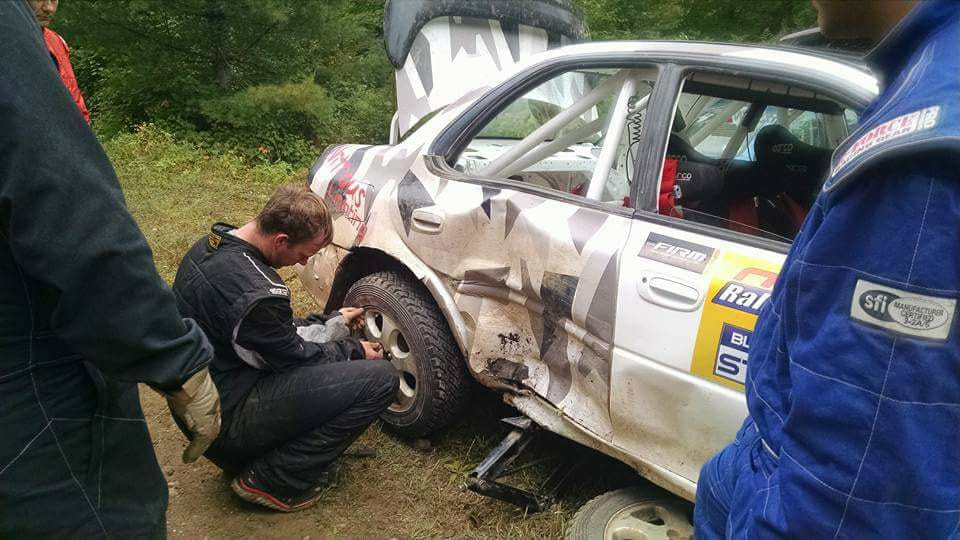 Stage six went okay; we still did not take any jumps, but I drove at a quicker pace. This gave us a moderate time, still beating 6 other teams, which I found surprising. When we arrived, our crew located a team with a complete spindle for our car. We made sure to ask them if it was the 5x100 bolt pattern version, but upon installation we realized that they gave us a 5x114 bolt pattern spindle. Struggling to get back onto the stage, we tried boring out the rotor and wheel stud holes to fit the new bolt pattern. The caliper did not fit after we got the rotor on, so we just tied it back and accepted not having brakes for that wheel. We were able to get the car back together and rolling again just in time. 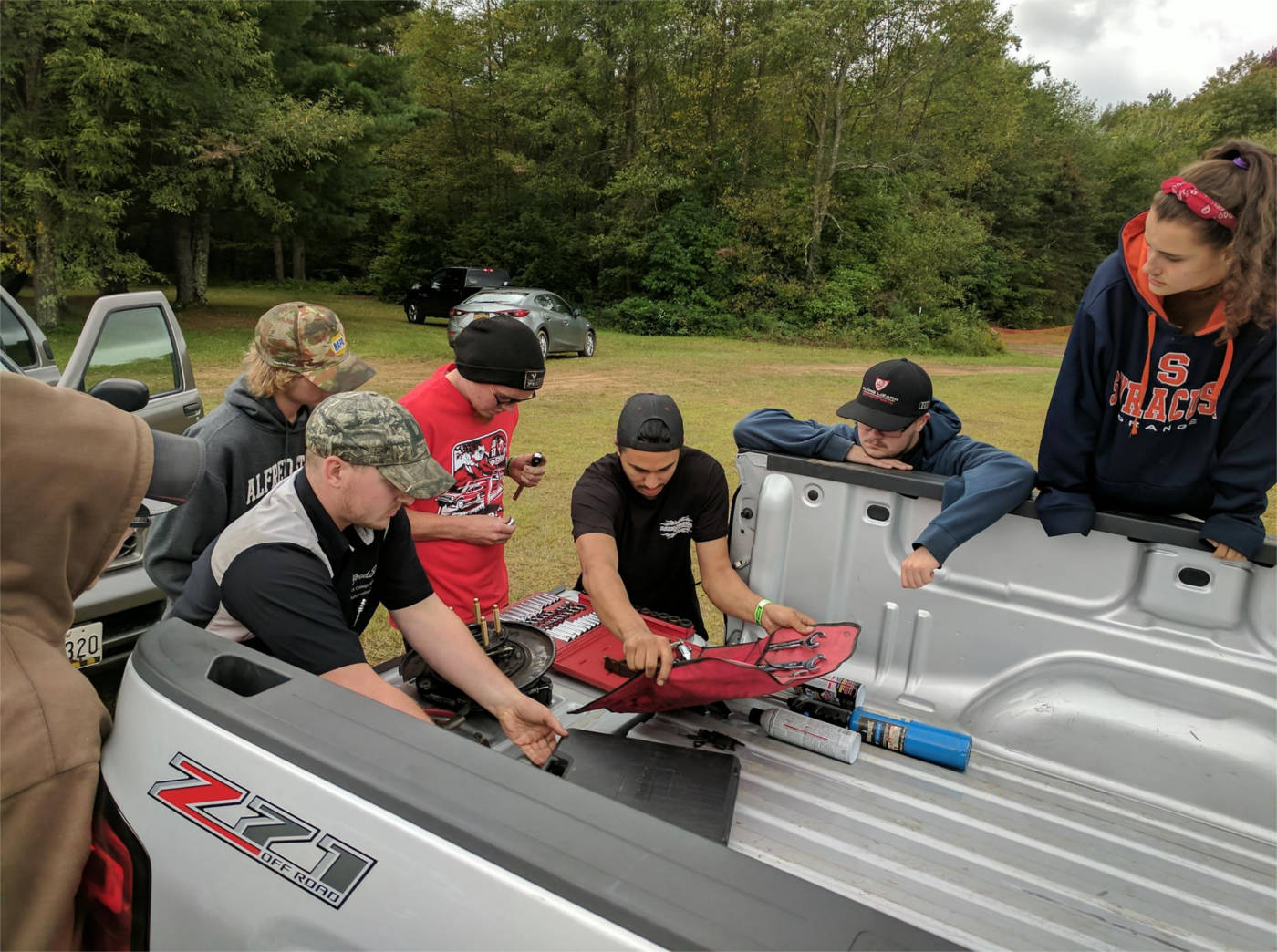 Then the car just died...

After checking for spark, we checked the fuel. And the fuel contained coolant. I knew exactly where that came from. Let's just say, if you ever put anything except gas into the gas can, empty it out as soon as you can. If you are unsure, dump it. Because even if it smells like gas in the can, it doesn't mean it is. I brought a gas container that was half full of coolant, and our crew topped off that can in the morning. This was for sure the most stupid thing that I have ever seen at a rally, and I take full responsibility for it...

After almost an hour of draining the tank with the fuel pump and trying to get the flooded engine started, we were up and running again. We had to accept the fact that we skipped three stages doing this.

We drove up to stage 10 and prepared to launch the car. And just when we did - SCRAPE! The axle nut popped off and the axle was spinning in the spindle. Guess what, a 5x100 axle does not fit on a 5x114 spindle. I was surprised that it engaged so well in transit, but a good launch really did it this time. At this point we were done. There was nothing that we could do to keep us in the event.

All in all, we had a good time; we set some awesome times, and we fought to the bitter end. It was finally time to relax, chill out at our cabin, and head home.

So what did I learn at this event:

Special thanks to our crew: