Today, I will walk you through my steering quickener installation for my Subaru Impreza 2.5RS Rally Car. I have been contemplating this installation in the past, but after the BMR Rallycross I felt that it was necessary. Before, my mindset was, if you need that much constant steering effort, you are not driving efficiently. Even though I believe this is mostly true, I think it would be very beneficial for odd understeer and emergency situations. A better response rate is just an advantage right? As far as the driving experience goes, I believe it will improve my driving quality overall. Enough theory, let me tell you how I did it.

After extensive research from other people who have done this modification, I was pretty confident in my plan of attack before the parts even came in. I decided to go with the Howe 5225 Steering Quickener. It has a 1.5:1 gear ratio; the other common option is 2:1. I chose the 1.5:1 because I did not want to overload my power steering pump. Also, a 2:1 gear ratio is harder to turn, so the turning resistance could also be counter productive. This decision was based on assumptions, so do not take them too seriously. I made sure that I added the steering quickener into the steering column with maintenance in mind. Some installations online that I have seen would require cutting up the entire steering column again to replace the unit. Some even weld the shafts of the steering quickener directly. Howe recommends inspecting the units annually or 2000 laps. Not a very helpful guideline in my opinion, so I would like the option of inspecting it annually.

First, I just went to town and cut out the section of tube and shaft that I will replace with the quickener. The shaft in the center is what actually rotates, while the tube on the outside acts as a carrier with bushings that lets it mount securely to the crash bar inside of the car and to the firewall. When we cut the column like this, we need to make sure that we keep the outside tube connected in some way. We also need to mount the steering quickener to the outside tube somehow. More on that later. 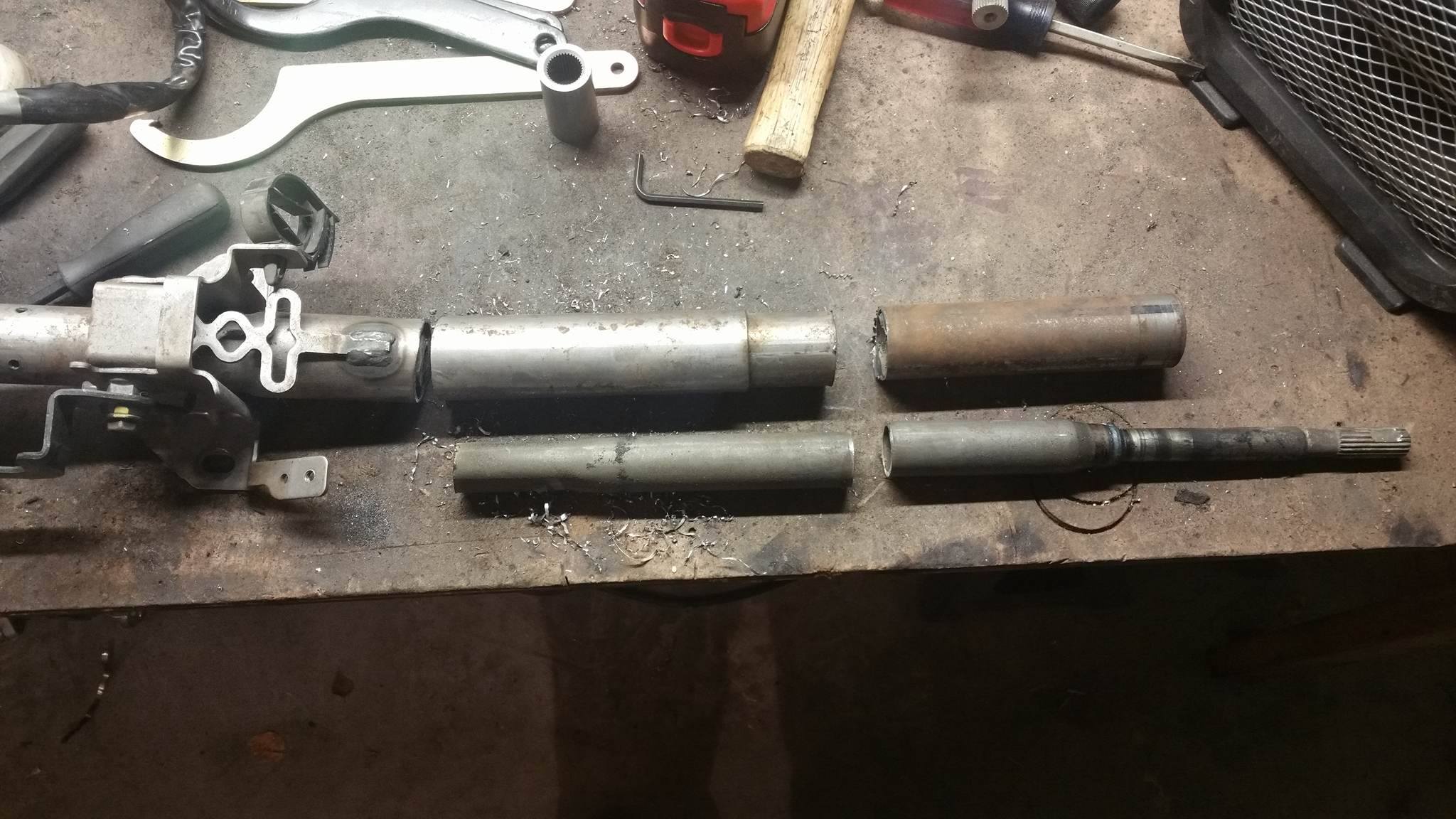 I bought the Howe 5221 Splined Couplers to connect the quickener to my stock steering column. One end is welded to the steering shaft, while the other end connects to the quickener with splines and a set screw. 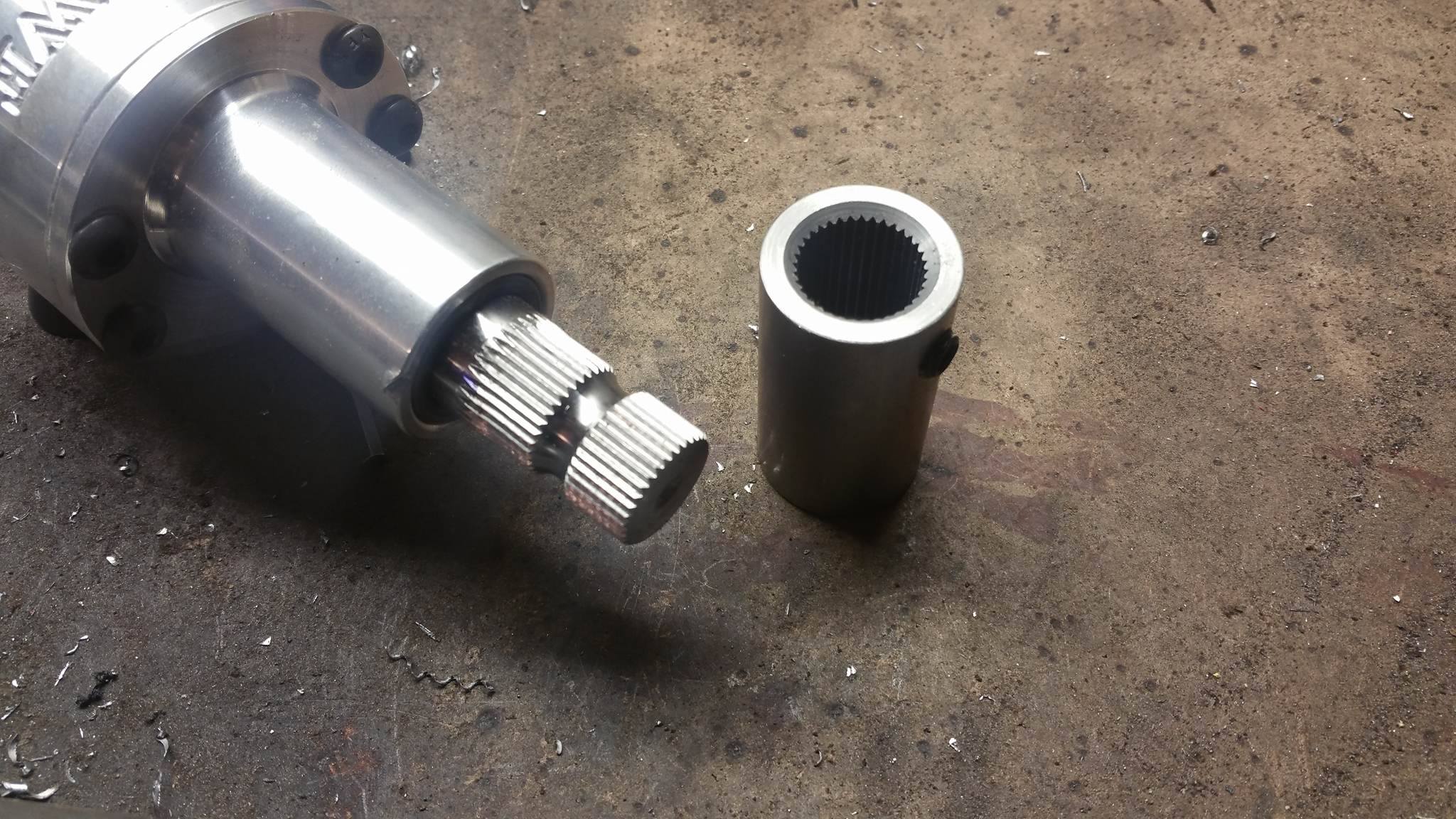 I tried to make sure I spliced in the quickener without changing the overall length of the steering column. In just a few minutes, I already had the couplers tacked in place and the quickener connected. 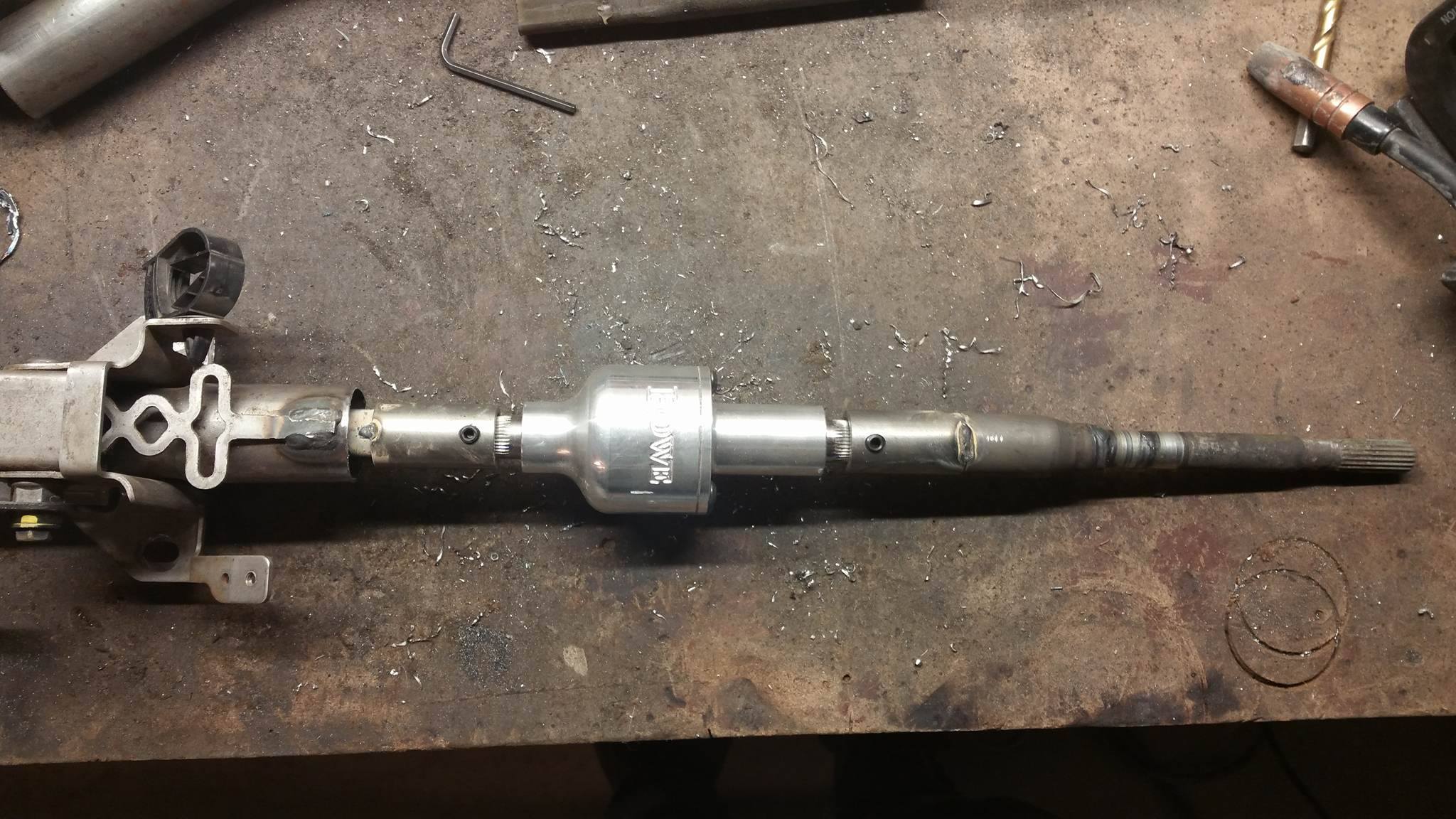 This is where the real work starts. We need to merge both sets of carrier tubes and mount the steering quickener. We also want to be able to remove the quickener without any cutting. To do this, all we need is a thick steel plate. Each end will be bent at an angle so we can weld it to the tubes. The center of the plate is where the quickener will bolt to. For the ends of the plate, we need to increase the contact area to the tubes, so I cut the corners off and used them to make a gusset. After a lot of aligning and adjusting, I made a solid bracket. 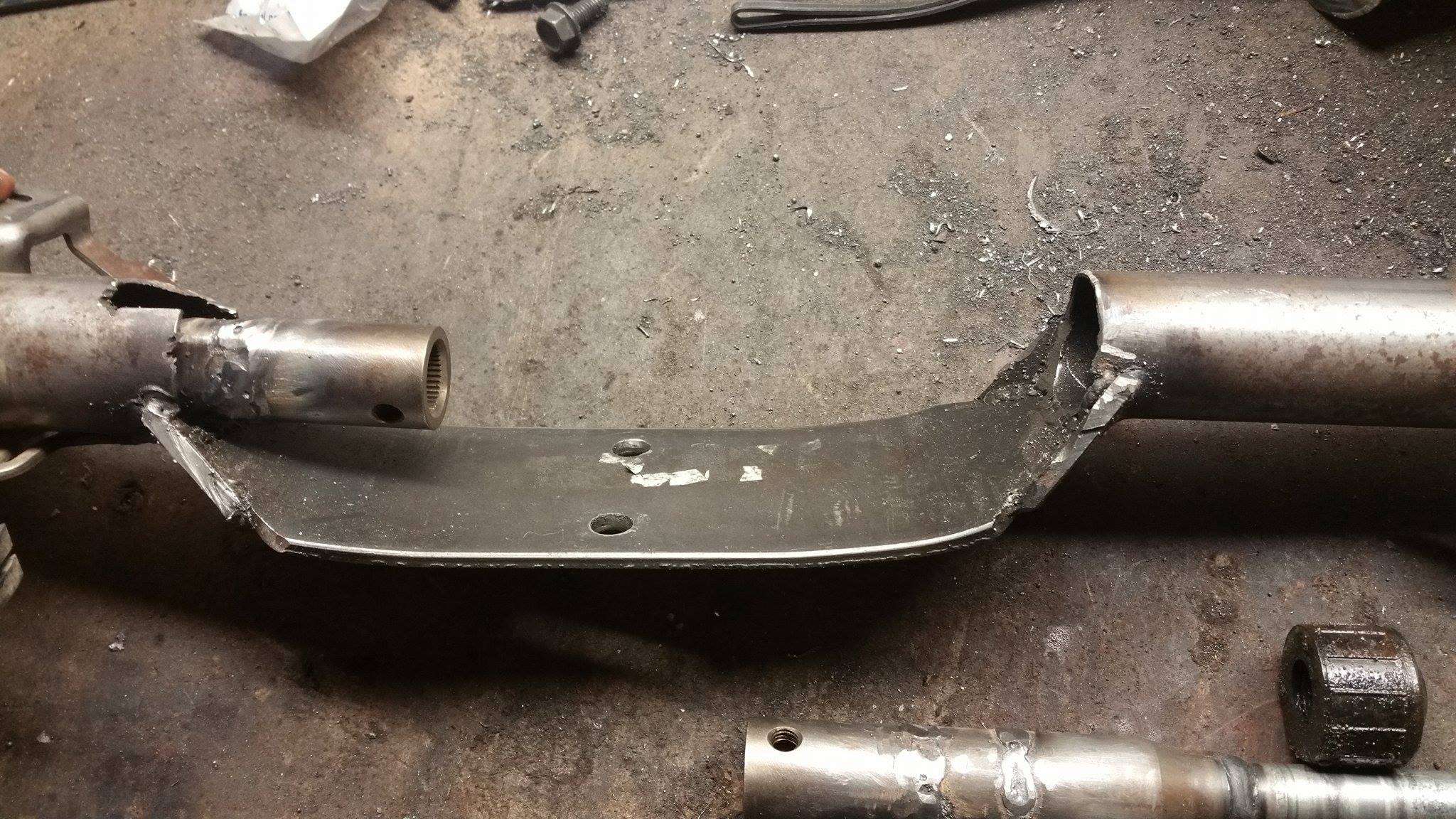 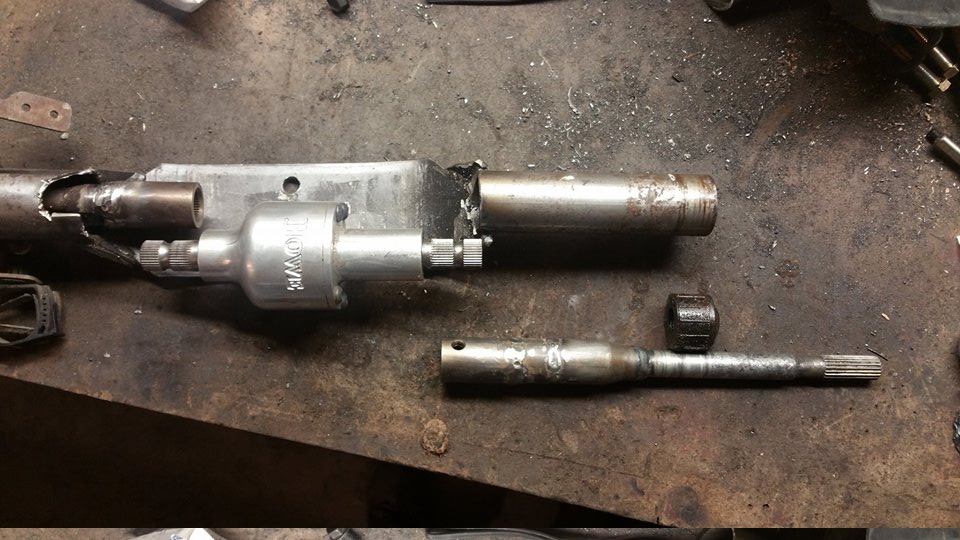 After finishing the alignment, it was time to assemble everything and test fit it inside of the car. I ended up making the new steering column too short when I tried installing it, probably when I was trying to fix the binding. I had to cut into the output end of the shaft and extend it a fraction of an inch, that's why there are two welding seams in the picture above.

All that is left to do is clean up the sharp edges and give it a little paint! 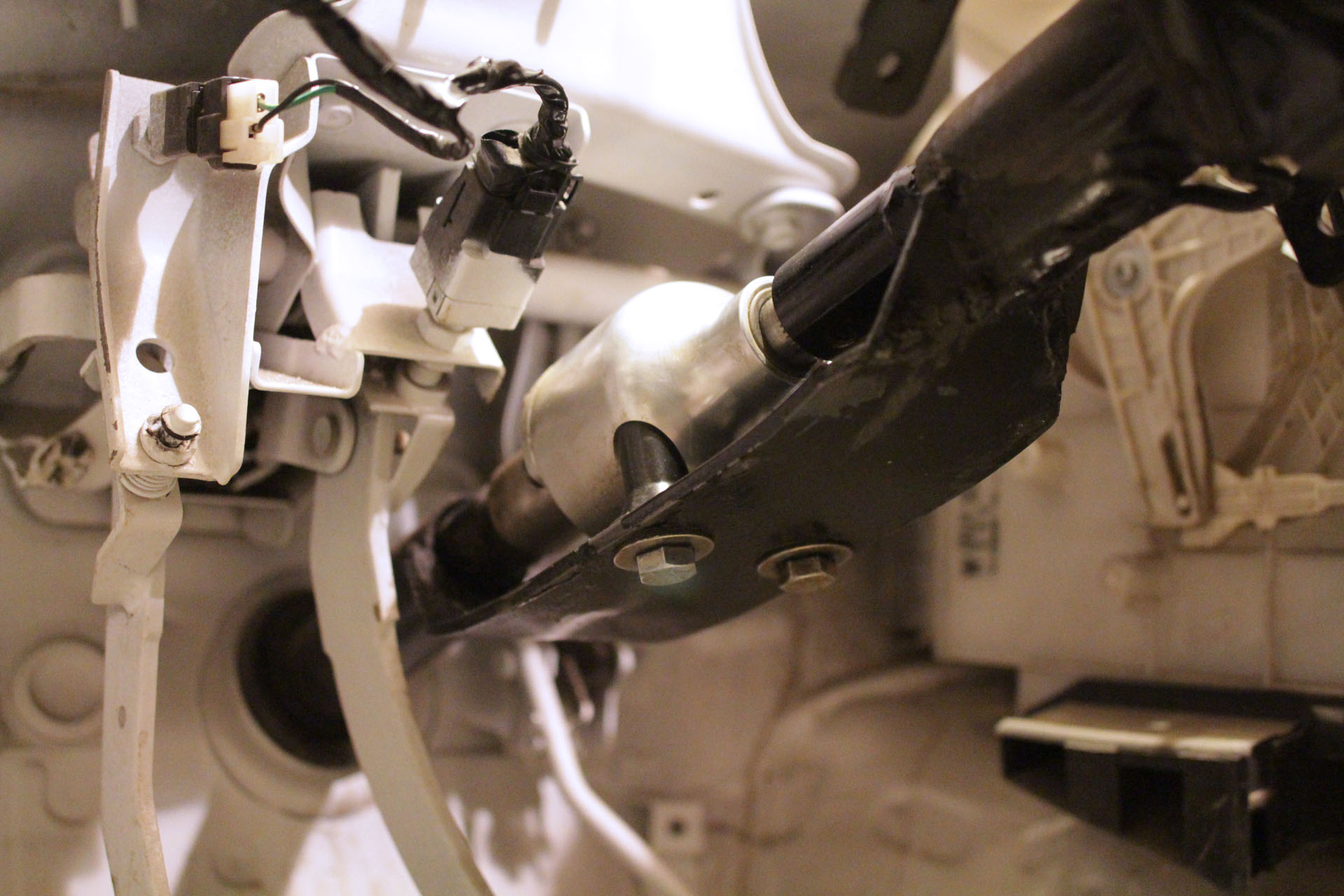 In the end, I accomplished my goal. The steering quickener is easy to remove and can be easily serviced.

Once the steering column is out of the car you can service it by following these steps:

My first event with this quickener installed was Waste Management Winter Rally 2017. I was impressed with how easy it makes correcting a slide when coming out of a turn. I definitely recommend this for rally cars. Street cars, not so much, since driving in a straight line will require more focus because of the increased sensitivity.

If you are interested in doing this modification on your car, you can find the Howe 5225 Steering Quickener on Amazon as well as the Howe 5221 Splined Couplers that I used.